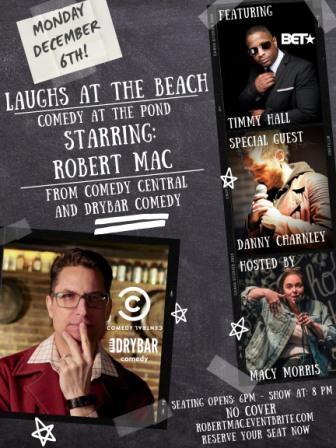 What’s Happening This Week at The Pond, November 29 to December 6

Written by Pete Borsari on December 1, 2021. Posted in This Week

For the month of December, The Pond will have entertainment at 2PM.  Whether you’re out shopping at the outlets and need a break or just want to enjoy some great music, stop by The Pond.

And we have a really awesome Monday Comedy Night lined up on December 6 with headliner Robert Mac.  We open at 6PM, showtime is 8PM and we accept reservations for the Pub Room.  So… who is Robert Mac? In his own words: “I’m an award-winning comedian (Comedy Central’s national stand-up competition) a non-award-winning Master of Ceremonies, and a fake motivational speaker, among other things. My act is clever, clean, and ideal for audiences wanting something a little more cerebral. It’s brainy and deadpan instead of brain-dead and pandering.”  Here’s a link to a You Tube video: Robert Mac

Our line-up for December:

December 4 ~THE JIMMIES at 9PM