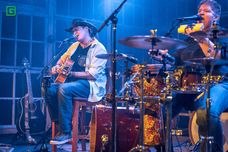 What’s Happening at The Pond, April 4 to April 10

Tuesday, April 5th is The Pond’s one-year anniversary at our new location!  Hard to believe it’s been a year but on the other hand, we have begun to settle into our new location.  We are excited to announce that Karaoke Night is back at The Pond every Tuesday around 9:30PM (shortly after the conclusion of everyone’s favorite Survey Sez.

April 23 ~ An Evening with Pamela Stanley