What’s Happening at The POND, January 2023

Written by Pete Borsari on January 17, 2023. Posted in Special Events, This Week

A few months back we re-designed our website, including an opening window that informs folks as to what is happening at The Pond for the next seven days.  Here’s the link: THIS WEEK

We will be introducing a new Pond Loyalty Program in late January to coincide with the installation of our new POS system.  The new system will better enable us reward our Loyalty Members.  Stay tuned for a separate email about this new and exciting program!

Some of you have noticed that we have changed The Pond’s hours for the off-season.  With the exception of Superbowl Sunday (we will be open for the game!).  Below are our hours.

Here’s What is Happening in January 2023… 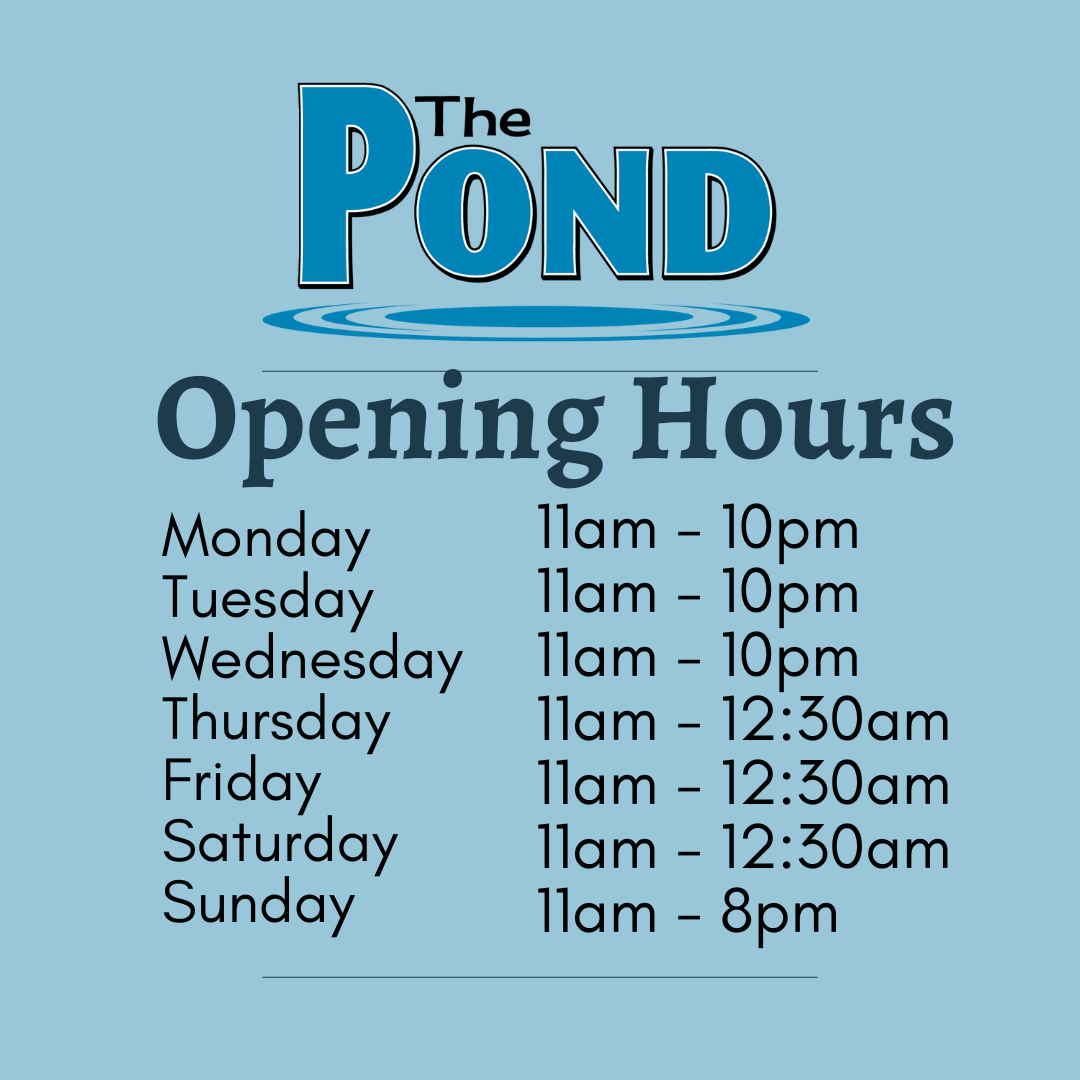 Written by Pete Borsari on December 2, 2022. Posted in Latest News

Written by Pete Borsari on November 21, 2022. Posted in Special Events

There is limited seating in our Pub Room.  Click here for reserving a pub table (seats four), a bar stool or a table in the dining room:  New Year’s Eve Reservations

Our Menu for New Year’s Eve:

Written by Pete Borsari on November 7, 2022. Posted in Latest News

Did you know that our website links to what is happening at The Pond with a simple click?  THIS WEEK

~ HALF PRICE BURGER NIGHT from 5PM, MONDAY NIGHT FOOTBALL in the Pub Room

~ MATHEW STREET BAND in the PUB ROOM at 8PM

What’s Happening at The Pond, Week of October 23

Written by Pete Borsari on October 24, 2022. Posted in Latest News

It’s almost Halloween Weekend!  The Pond is decorated for our Halloween Party with Sweet Leda beginning at 8:30PM!  We have a very special Halloween Libation menu sponsored by Tito’s Vodka and Jack Daniels. Click here for details: HALLOWEEN MENU

AND…. Jack Daniels is providing our guests at The Pond with a $15 discount for Uber this weekend so you can get home safely!

Also on Halloween Weekend, on Friday, October 28, we have OFF 24 playing at 5PM followed by Delicious at 9PM.  Thne on Saturday at 2PM, it’s Girls Room!  And of course, we celebrate Jaime’s birthday and Halloween with Sweet Leda at 8:30PM

We have been having lots of fun with our NFL Sunday Funday.  We will always have ALL the NFL games on at least on of our TVs.  AND we always will be showing the Eagles and Ravens with sound in either the pub room or dining room. Check our our menu here:  NFL SUNDAY FUNDAY MENU

Finally, we are going to be trying out MINGO on the first two Wednesdays in November.  So if you like Music and Bingo, this may be for you! 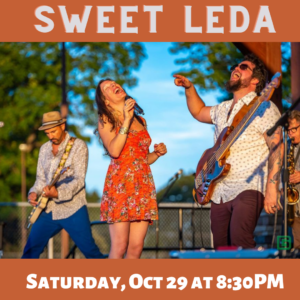 Written by Pete Borsari on October 24, 2022. Posted in Latest News

Written by Pete Borsari on September 27, 2022. Posted in Latest News

We are celebrating The Pond Bar & Grill’s 40th Anniversary on Saturday, October 1, 2022 with music.

At 1:00PM, Bobby Lee Jones will be kicking off our party!

At 5:00PM, Electric Velvet (Kristen, Anthony & Dale) will be taking the stage and rockin’ The Pond.

We will have food and drink specials throughout the day!

Labor Day weekend is almost here (where did the time go?!).  We have a great entertainment lineup for this weekend:  Lower Case Blues at 5PM on Friday followed by Daddy Band at 9:30PM, OFF 24 is back on Saturday 9/3 at 5PM and The Jimmies 80’s Band takes the stage at 9PM(ish); Girls Room closes out our 5PM Sunday entertainment schedule as we get ready for football and Tyler Greene & The Friends rock at 9:30PM.

Speaking of Football, we have to admit that this year’s NFL Funday Sunday will be the best yet.  Click here for a peak at our NFL Football Menu (plenty of loaded fries!).  NFL SUNDAY FUNDAY MENU

Lots of great games at 1PM so make plans to be at The Pond on Sunday, September 11th!

Monday, September 5th will be our last “Mondays with Bobby Lee”.  Bobby will be back on Saturday, October 1 at 1PM to kick off The Pond’s 40th Anniversary Party!

at 9PM on September 8th  ~ Tyler Greene & The Friends 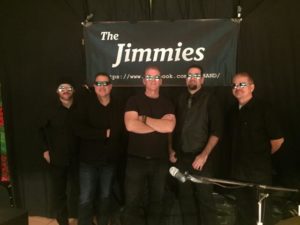 What’s Happening at The Pond, August 16 to August 31

Written by Pete Borsari on August 16, 2022. Posted in Special Events, This Week

Although August is winding down, live entertainment continues here at The Pond.

We have a new band Milton J. making its debut at The Pond on Saturday, August 20 at 9:30PM, so mark your calendars!

Honey Sol, made their first appearance at The Pond on July 30th; the band returns on Saturday, August 27th.  Honey Sol was absolutely phenomenal and is a must see!

Speaking of MUST SEE, our favorite sheep are back at The Pond at 5PM on both August 19th and August 20th.

Nate McCormick will be filling in for Lower Case Blues on Thursday, August 18 at 9PM (ish) and Foggy May returns on Friday, August 19 at 9:30PM.

The last Friday of the month, August 26th sees a double whammy with Hot Sauce at 5PM and Freshly Squeezed at 9:30PM.

What’s Happening at The Pond in August

Written by Pete Borsari on July 25, 2022. Posted in Special Events

We haven’t literally seen time fly, but how else did August arrive so quickly!

Mike Check & The 1-2’s is back on Friday, August 5 at 9:30PM.  This fabulous trio is an offshoot of Three Sheets and they play lots of pop/rock favorites, as does 3.0.2. Band which opens that Friday at 5PM.

In addition to Bobby Lee Jones on Mondays at 6PM, Bobby will be appearing on Saturday, August 27 at 5PM.

Foggy May returns on Friday, August 19 at 9:30PM.  AND our favorite sheep, Mama’s Black Sheep will be playing at The Pond at 5PM on both August 19th and August 20th.

A reformulated Delicious is back on Saturday, August 6th.  Classic rock band Mathew Street is back on Friday at August 12 at 8PM.  Plus Divas of One Love at 8PM on August 13.  The last Friday of the month, August 26th sees a double whammy with Hot Sauce at 5PM and Freshly Squeezed at 9:30PM. 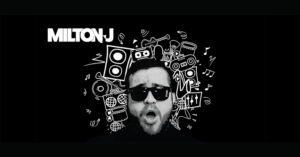